Background to the British Long-Bow Society

The British Longbow Society (BL-BS, BLBS) was formed in 1951 with the primary aim of keeping the tradition of shooting the English/British recreational longbow alive. It organises competitions around the UK and has affiliates in Ireland, the Netherlands and the US. The Rules of Shooting are sent to new members - basically all shoots are 2-way with no sighters and no bouncers allowed. Members attending BL-BS organised shoots are eligible for national rankings and awards.

There are a number of BL-BS websites currently active (as listed by Google). The latest official iteration appears more complete although no on-line shooting diary available yet.

Around March of each year, members receive a printed Events Diary listing all the competitions for the coming year together with application forms for all events. Below are listed those open events occurring in the SE England region (similar to AGB’s SCAS region).

Shoots organised by BL-BS are in bold text, those organised by others (eg AGB affiliated clubs) but shooting to BL-BS rules are in normal text. There are only 2 types of shoot organised by the BL-BS, Target and Clout, listed below:

Rounds are always imperial and 2-way (unless stated otherwise). The overall winner is the archer achieving the most hits (silver medal), 2nd is based on highest score (bronze medal) 3rd is based on most golds (bronze medal). These are awarded on an 'unrewarded basis' - so, if you win on hits you are excluded for the 'score' and 'golds' awards - this way more archers are rewarded.

If double rounds are shot then awards are also made for the first and second rounds, again on an unrewarded basis, in addition to the overall shoot winners. 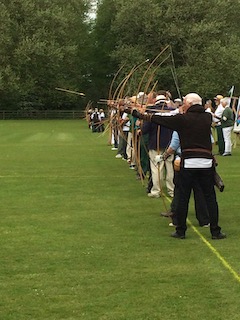 Longbows shooting a 2-way round 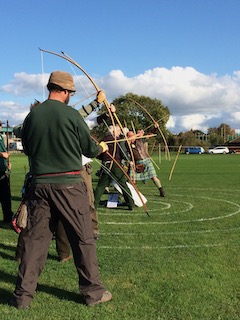 Also an additional “shoot-off by ends” is held: during the double round the scorer notes at each end whose arrow is nearest the middle – judged by distance of the part of the arrow nearest the clout, not necessarily where it meets the ground (so that archer “wins the end” regardless of score).  At the end of the double round, shoot-offs are held for 2 ladies/target and 2 gentlemen/target with the most best arrows (aka “ends won”).  Each archer shoots 2 arrows individually in turn and the nearest to the clout wins the "shoot-off”.