The club makes a number of awards of engraved cups and medals to members during the year in two ceremonies for the winter and summer events. These recognise the best absolute or handicap scores by its most successful archers both on a pre-determined Championship day and also over the course of the year.

From June 2019 we introduced a modified approach to awarding the ‘handicap' awards. These are now on an ‘unrewarded’ basis (similar to the BLBS award scheme): that is, if an archer wins an award or medal in the ‘scratch’ competition he/she cannot also win an award/medal in the ‘handicap’ section. This allows more archers the opportunity to win awards and medals. 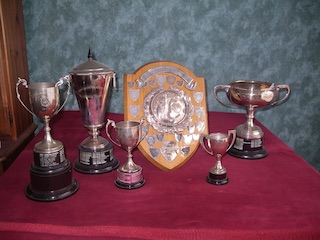 There are separate awards for ladies and gentleman as well as juniors.

To see the winners, other than juniors, for the last several years, please open these files (pdf):

Personal Achievement badges: Members are also awarded these based on their scores for Portsmouth and Frostbite competitions. Personal achievement awards (since 2011, xlsx - 20kb)

Club records: We have been entering all archers' results into software that enables us to determine who holds the Club Records ('Excel') based on bow style, round, age and gender. This was started in 2013 so there may well be Club archers with higher scores that were gained prior to this date. Records (updated Jan 2020, xlsx 50kb)

Tournament Badges: Some tournaments may advertise if 'Record Status' applies to the shoot. If you attend these you may be eligible to a range of badges based on your score. These are from Archery GB, unless stated otherwise

Arrow awards for juniors (under 16) - need 4 scores, 1 of which must be at a tournament.

English Cross badges can be claimed for scores made at any record status (UK or WRS) WA1440 (12 dozen), or the relevant Metric round for juniors, shot in England from the English Archery Federation

Tassel awards are available based on clout score. Organised by the Northern Counties Archery Society.